If the community room at Newton Green Senior Apartments is the control center of the beautiful 78-room apartment building, then Ruby White sits in the captain’s chair. “Last year, we could see two beavers building a dam down there,” Ruby said one afternoon in March, pointing out the window of the community room, down to a babbling brook where all manner of birds, squirrels, deer and – apparently – beavers sometimes congregate. A few residents, she adds, sat by the window all day in the fall, watching the beavers work.  Ruby would know.  The 76-year-old became one of Newton Green’s first residents in December 2009. She had moved from California in order to be close to her mom, who is 91 and lives just three doors down the hallway. A self-described people-person, Ruby has thrived at Newton Green, serving both as a president of the tenants council (now defunct) and as a board member for Housing Initiative Partnership (HIP).  She’s also the keeper of the dominoes and has a key to the cabinet where the Wii controllers are kept for Thursday night Wii Bowling.   “We have people who never could bowl and now they’re bowling over 200,” she said, adding that the Wii bowlers sometimes take on other folks from nearby apartments. “We just bowled against another building – they invite us over and we invite them over, and we bowl to see who is going to win.” Living at Newton Green and serving on the board has enabled Ruby both to benefit from HIP’s work and to help direct it at the same time.  Before moving to Maryland, Ruby raised six daughters and worked at a family-owned drug store. Serving on the board, she said, was “at first … confusing because I had not ever been on a board of anything.” “I had to take a period of learning how the board works and what its role is in the communities. I really enjoyed it because they did so many things to aid people.” As for life at Newton Green, Ruby calls it “a beautiful facility” – one that’s always bubbling over with activities, including weekly outings.   She also cites the building’s earth-friendly construction – the low-energy light bulbs, the recycled materials that went into the building’s construction, and the tables decorated by artists living at another of HIP’s properties, Renaissance Square Artists’ Housing.   These tables, Ruby said, are the envy of all their guests. “No two are alike.”   And that goes for the residents who call Newton Green home, too.  “When I lived in California, I lived in a home,” she said. “I was able to get in my car and go where people were like-minded. I’m a Baptist, so I hung around Baptists. Well, here, there’s all kinds of different people… We are alike in some areas but no two people are identical, not even twins. We may look the same but each one has a distinct personality, and that’s the way it is in this building.”   As Ruby rattles off the diversity of personalities and passions represented at Newton Green, it’s clear that she loves where she lives.  “Like I never ate fish [much] until I moved here,” she said with a smile. “Now I find myself eating fish every Friday.” 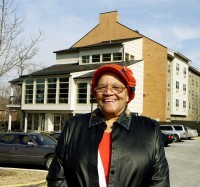 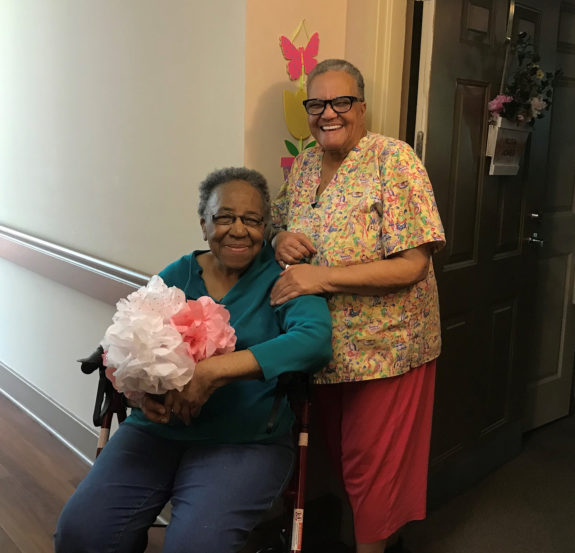 Ruby with her mom, Rosa Jones, who lives across the hall and turned 98 in April. She celebrated her birthday in Quarantine – HIP had a volunteer make her this bouquet of paper flowers – she’s our oldest resident.