Living at Mount Rainier “One of the Best Decisions I’ve Ever Made.”

In some of Tim Sebian-Lander’s earliest memories, he is hunched over a sketchbook drawing a line of trucks on a mountain pass. Two decades later, the 26-year-old Maryland native is still hard at work at his art – thanks, in part, to the community and workspace he has found while residing in Housing Initiative Partnership’s Mount Rainier Artist Apartments. “It’s very ideal to producing art. I have this one room that is completely windowed in,” said Tim, a graduate student at Bowie State University. “The light is great, the floor is cement, so you can get it kind of dirty. And it’s my studio – I absolutely love the layouts in this building.” Tim has lived at Mount Rainier for two years and is one of about 12 artists who call the apartments home. Each has been designed with the artist in mind – all the way down to the energy-efficient fixtures and the natural-light workspace. “My utility bill is around $50, and I can manage that,” said Tim, who began to rattle off other perks of living at Mount Rainier. “The rent is subsidized. It’s in an up-and-coming neighborhood. There’re two or three galleries across the street. We’re right down the street from Hyattsville, and a stone’s throw from DC.” For proof that Tim’s time at Mount Rainier has benefited him as an artist, look no further than the paintings he has been producing at night, on weekends and during his summers off from graduate school. For example, the first image to greet you when you visit his website, www.TimSebianLander.com, is a spell-binding portrait of President Barack Obama.

Tim says the painting was inspired by a photo he saw on the cover of The Atlantic magazine. “I love working with faces,” he said. “I’ve always been drawn to portraiture. There’s so much you can tell from the eyes. It sounds cheesy, but they really are the gateway into a person’s soul.” One of the standout characteristics of Tim’s art is his provocative use of color. “I love expressionism, the way the colors move around the image. It’s more deliberate than it looks. One color [often] leads to the next,” he said, explaining his vibrant palette. Tim’s social life at Mount Rainier is also full of color. “As an artist, you need continual feedback. You need to bounce ideas off of people.” Living in a place like Mount Rainier, he said, “helps you so much.” One of Tim’s biggest breaks as an artist came after he moved into the apartments and began spending time with others in his building. “One of the guys upstairs connected me with [artist] John Paradiso, and I was selected to be an artist-in-residence at the Gateway Arts Center [in Brentwood, Maryland]. I was there for six months and had a key for 24-hour access. I had my own studio. It was a phenomenal experience, and I attribute that to being here and meeting the people in the building.” While living at Mount Rainier has opened up new doors and facilitated Tim’s growth as an artist, it’s the community around him that he is most grateful for. “As an artist, one of the best things that can happen is someone can appreciate your art, outside of the realm of people that you know. For it to be shown at other places, it makes me want to do it more. I wouldn’t have had any of those opportunities if I had stayed [at home] in southern Maryland. One of the best decisions I’ve ever made was to come here.” Upon finishing his graduate program in counseling psychology, Tim hopes to work as an art therapist. But his day-job and his painting will always go hand-in-hand. “I don’t foresee me not doing painting. With each painting and drawing, you learn about what you have done before,” he said. “I will always be doing this.” 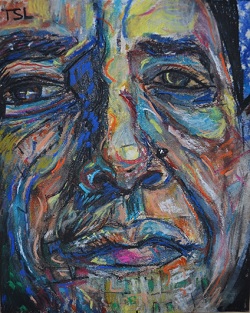